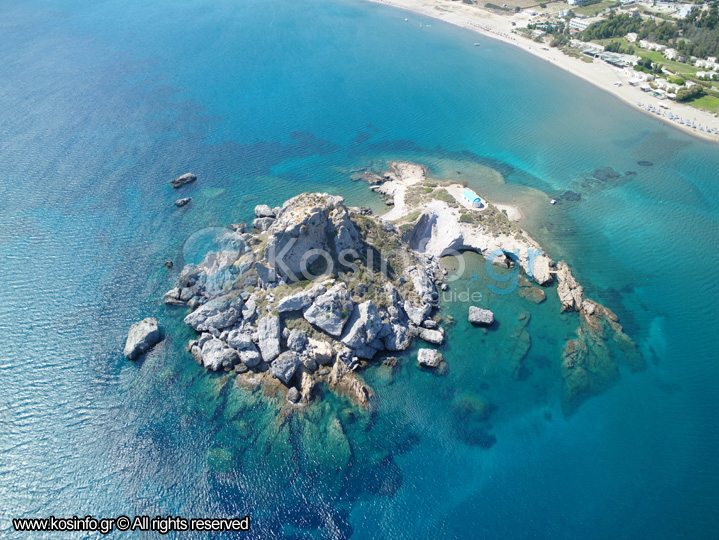 Kefalos is 40 kilometers south-west of Kos town and it’s a beautiful village built on a hill at the west side of the island. By antiquity it was the first capital city of the island and today it counts some 2.500 permanent residents. The houses here are built so close one to another that the narrow streets created emphasise the
traditional architectural features of most Greek islands, which invite you to make a tour in the history and life of the place. One of the most interesting buildings is the traditional house, a folk museum which includes a representation of the villages’ agricultural life back then and next to it completing the scenery is a traditional windmill. The picture of the old town is completed by the ruins of the old castle, just next to the main village. In Kamari, at a distance of only 1 kilometer on the eastside of Kefalos you can find a marina which provides its services for many yachts and small boats during the summer. In Kamari you can see the Early Christian basilicas of Agios Stefanos, dating back to the 5th century and admire the still preserved parts of the mosaic decoration along with other remnants. 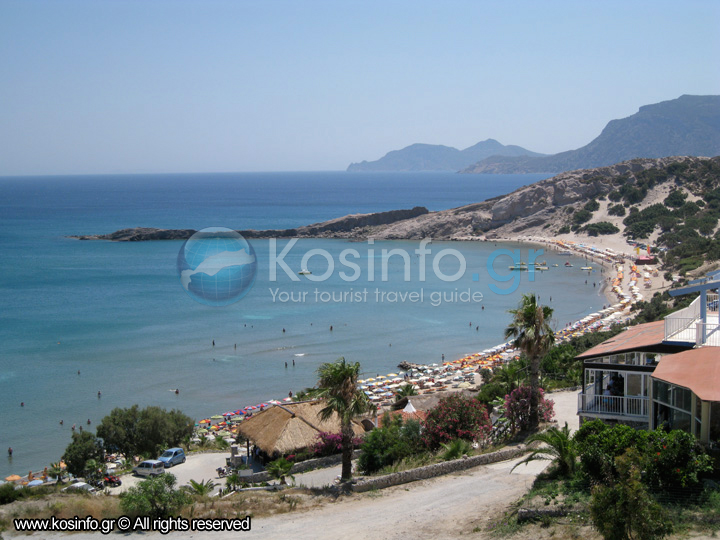 Just across in a short distance, quite close to the coast, lies the islet of Kastri with its small church of Agios Nicolaos, who protects all sailors. In the area of Palatia, 3 kilometres south you can see the ruins of Astipalea, which was the ancient capital of the island, the ruins of the temple of the Goddess of agriculture Dimitra (5th century B.C), one of the temples of Asklipios, along with a later built temple in Doric form and a theatre of the Hellenistic period. On top of the hill you can visit the Panagia Palatiani church dediKos Village Kefalos Paradise Beachcated to the Virgin Mary and enjoy the magnificent view of Kefalos and of the sea below. The church of the Panagia Ziniotisa again with a beautiful view is in Zini 1-2 kilometres south of Palatia. The cave known as “Aspri Tripa” (White Hole) is a little bit further from the church and has findings from the Neolithic period and of more recent times. Just 7 kilometres from Kefalos is the Holy Monastery of Agios Ioannis (St. John) with its main characteristic being the perennial plane tree, which covers almost completely the small church and even reaches up to its bell tower.

11 kilometers to the south you will find the ruins of the small church of Agios Mamantos right next to the homonymous new one while still being able to enjoy the beautiful view at sea. 5 kilometres north from Kefalos, you may visit the small cove of Limnionas, with a small port, a shelter for the small fishing and tourist boats in case of rough sea. 7 kilometers south-west stands the church of Agios Theologos alone, with beautiful small coves and rocky beaches. A minor drawback is the dirt road (about 5 kilometers) but by crossing through it you will see the small church, and also enjoy secluded beaches. There are several accommodation options in Kefalos and the food is good everywhere. You definitely have to try the local sweets, especially those made from the local honey. At the several beautiful beaches at Kamari and the beaches at the Kefalos cove: Chrisi Akti, Polemi, San Beach, Xerokampos, Laggades, Paradise, Camel, you’ll enjoyKos Village Kefalos Port swimming and sun bathing. It’s best to visit Kefalos in July or August, so you won’t miss out on the local festivals on the 26th of July in honour of Agia Paraskevi, on the 15th of August, celebrating the Assumption of Virgin Mary and on the 29th of August in honour of Agios Ioannis (St. John), in October the tour of Kefalos takes place and during the Carnival in February or March, the locals and the few tourists have the chance to party and dance. A Police Station and Medical centre are available in Kefalos. Access from Kos town (40km) is possible by public bus, car and motorbike. 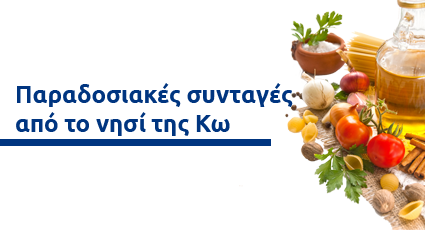